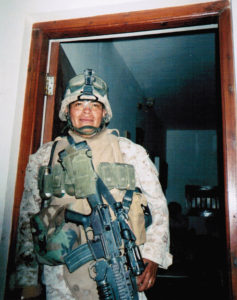 ​I grew up in Los Angeles around Echo Park, then moved to Highland Park for my teen years.  Graduating from Benjamin Franklin High school in 2002, I enlisted into the United State Marine Corps that June.

I decided to join the Marine Corps after the September 11, 2001 terrorist attack on our nation. I felt it was my patriotic duty to defend the country that has provided my family and everyone around me with so much opportunity. As a man, it’s my responsibility to protect my house when the wolf comes knocking at the door.

You know, in the service I experienced wonderful life lessons, and beautiful brotherhoods like no other. When you’re tested in the heat of combat and you are scared and you need a reason to fight on, you reach deep into your soul and find that all you need to do is look to the men next to you, who stands by your side through the worst. The brotherhood of men and women in arms is precious. It is hard-won and can’t be faked.

You will never be closer to someone then the men with whom you shed your blood. There is no greater cause than to fight for those who would in a heartbeat lay down their lives for you. That’s the reason we fight on. We fight for our brothers, our families, and our beautiful nation of free men and women.

​After my first deployment in 2004, I started riding motorcycles. It came out of a conversation in the combat zone. One hot summer day on the rooftop of a house in Iraq,  as I stared through my peep hole down the avenue of approach, covering my sector of fire, my buddy who was on post with me started telling me stories to keep me vigilant, positive and alert.

He told about how much fun was to ride a motorcycle down the coast, that it felt so beautiful when it was just you and your ride with the wind hitting your face, your hand on the throttle and the fresh ocean breeze washing over you… there was nothing more beautiful he could have said on that hot-ass day in the Middle East. You’ve got to have something to look forward to, so I promised myself I would experience that when I got back, and so I did, and I continue riding to this day. Riding down the coast is so relaxing, it’s breathtaking – and it’s even better to enjoy it with my band of brothers and sisters. Can’t forget the ladies in arms; they hold their own in combat.

Sometimes I ride because it relaxes me. Dealing with my memories can make me question my existence in this life, why so many of my brothers died over there fighting alongside me and I made it back for some reason. The nightmares of combat haunt me and when I look for answers and I find my best therapy in motorcycles. 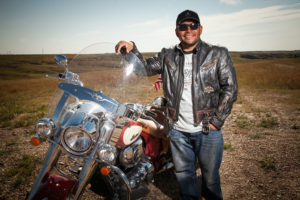 When I ride, I enjoy this great nation more and remember what life is all about. I know my brothers would want me to enjoy life and, guilty though I feel sometimes, they would tell me to enjoy it.

IMG_9491Riding free is what reminds me why we fight for our nation, our beliefs, and our way of life: to have the right to live as free men and women – and there is no better way to appreciate that than to feel the wide open highway through the bars and pegs of my motorcycle.

Great individuals can make a difference, too. One person I hold dear and close to my heart is a man I owe my life to: a great American, family man, and the most accomplished Marine leader I’ve ever been proud to meet. His name is John C. Maloney. He was the commanding officer of Charlie Company, 1st Battalion, 5th Marines during Operation Iraqi Freedom III, and was killed in action in Ramadi on one of the darkest days of my experience in the war. He is the reflection I see beside me when I look in the mirror. Especially during tough times, or any time I think of quitting on anything I do, Captain Maloney is who I see looking back at me and holding me to the highest standard. He was and is the example I try to emulate and uphold. I often ask myself, “Would Captain Maloney approve of my decision?”

He was such a man of honor that he would patrol with us no matter the conditions, the time, the weather or the situation. He held us to a high standard not with his words but through his example. After returning from such a tough and horrible deployment, battling through Ramadi in 2005, the battalion held a memorial ceremony for our brothers that we lost. I remember this like it was this morning.

My battalion commander presented CPT Maloney’s son with his Dad’s Bronze Star Medal with Valor for his actions of bravery during our deployment, then presented his wife with the Purple Heart and the folded American flag. I watched both of their faces. You could see CPT Maloney’s wife crying, and his son holding back tears. You could tell that the boy understood in his young, impressionable mind that his dad was a hero, that he died for him and his mommy. That his daddy died for a great cause, for perhaps the greatest cause: freedom. That his daddy would no longer be there, but you could see the boy was at peace because CPT Maloney had passed down to his son the value of our freedom and the need to protect it no matter what, but to also enjoy it together.

So many men and women have paid the ultimate sacrifice for just that reason: for this country – for all of us – to be free. 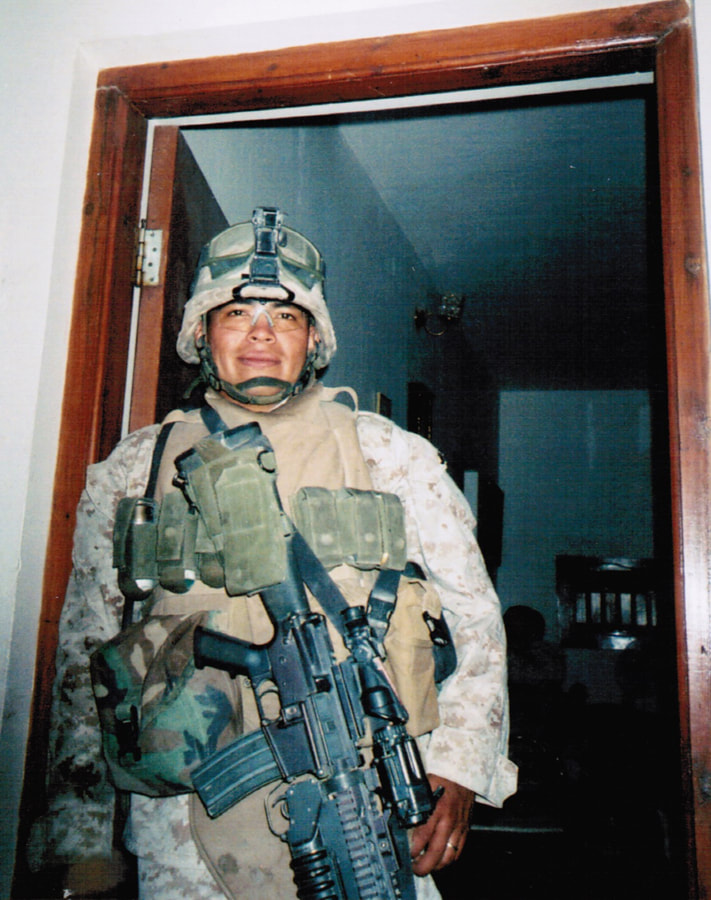 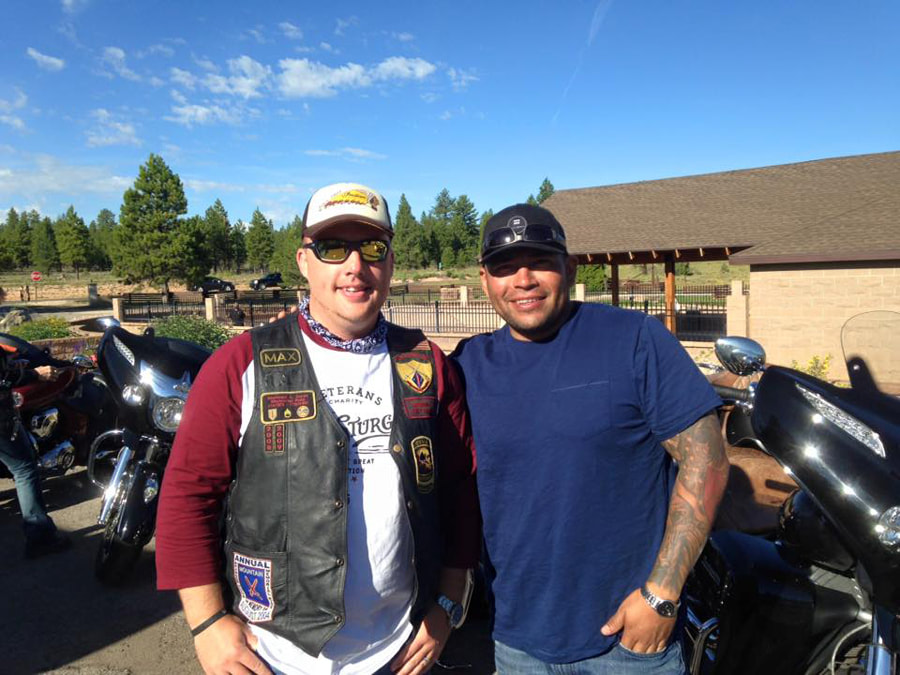 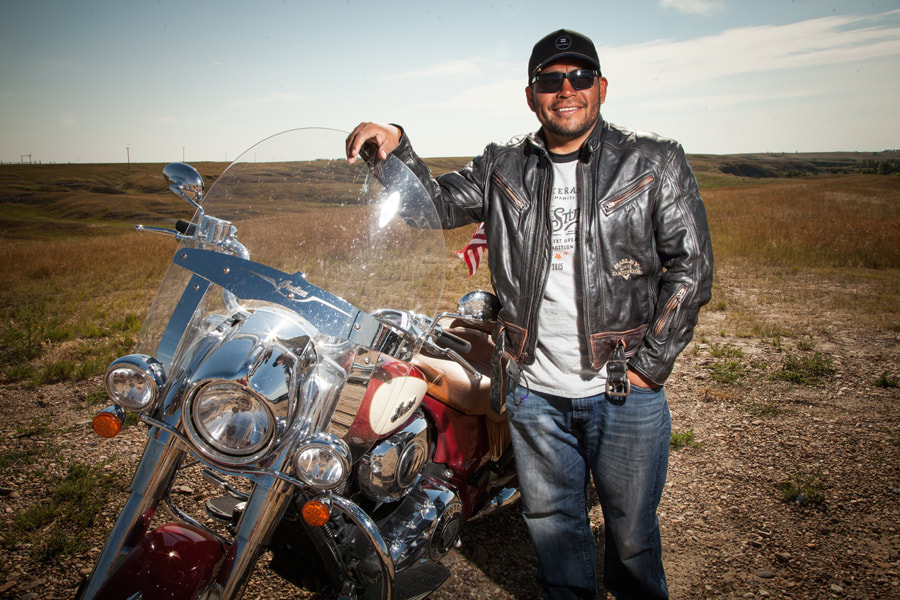